Everything Up to Date

The 2020 Kuwait Breeders Cup for Straight Egyptians with more than 300 horses participating made clear the vigor in the local scene is unbroken.

Being among the first Straight Egyptian breeders of Kuwait as well as an internationally appreciated judge, Talal Al Mehri of Aljazira Stud has an experienced eye for horses. He took a bold step selecting the best horses from famed farms in various countries. Furthermore, Talal Al Mehri proved that he can continue with such a valuable basis. At championships day, he had every reason to rejoice. It was not only his birthday but his horses won two times Gold, one Silver medal. With this, he won himself the “Best Breeder” award.

The influence of Al Adeed Al Shaqab on the sires’ side and a Hamasa mare on the female side of the pedigree can also be found in Luluwat Al Sadarahs’ pedigree. Her sire Omran Al Shaqab is by Al Adeed Al Shaqab while the dam Loula Elkuwait represents the fine family Latiefa – tracing back to Menha – Bint Bukra – founded at Bait Al Arab.

There was a widespread agreement in the Yearling Colt Championship. With five out of six votes, Sultan Al Obaid took Gold. His dam Rawaah Al Zobair traces back to Zaafarana through Haniya. Halim Al Safinat, Rawaahs’ sire, has several lines to Ansata Bint Bukra. The same goes for Sultan Al Obaids’ sire Motair Al Baidaa who is out of Ansata Bint Shahrezad of the Ansata Ghazala – Ansata Rosetta branch.

The nearly unanimous Silver winner Ameer Al Musrajat (Al Ameer Al Male x Anwaar) combines lines of Dr. Nagel’s Katharinenhof through his sire with the blood of Ansata Bint Bukra through precious Ansata Selket. Bronze was given to Asayel Fares, by Basil Al Farida, who is out of F Shubani Bint Al Lahab tracing back to Bint Bint Riyala through Omayma – Malaka.

With two-years-old Nada Aljazira winning Gold Champion Junior Filly, Talal Al Mehri has been able to chalk up the next success on his road to “Best Breeder” award. Again, the filly is sired by Sahm Al Shaqab. The pedigree of her dam Karamah Aljazira (Taleeth Al Naif x Kamla Al Waab) is wisely built; the “art of breeding” Judith Forbis mentions in her new book. On both sides, we find a combination of Moheba (through the dams) and Ansata Bint Bukra (through the sires) blood. Taleeth Al Naif is by Ansata Shalim out of Al Johara, tracing back to Malikah – Moheba. Karamahs’ dam Kamla Al Waab is by Sinan Al Rayyan and out of El Thay Rosetta, representing the Moheba II – Moheba branch.

Nasser Zaid Saad Al-Saeed of Al Jawhara Stud celebrated another success with another offspring by Thettwa Ezzain: Noor Al Jawhara gained Silver. In the pedigree of her dam Aisha Al Saif we find Ansata Bint Bukra six times but the mare trace back to Ansata Sameh through Ansata Jezebel, another famed branch of the El Dahma family.

For Junior Colts Championship the choice seemed to be difficult. The stage of development between the six colts was quite different. Other than with the fillies the colt with the highest score also took Gold; without exception, the judges choose two years old colts. Last year, Adeed Al Hilaliya took Gold at the ANC for Straight Egyptian horses now he took another Gold at the Breeders Cup. Adeeb Al Hilaliyas’ pedigree is a combination of broodmare Supremes Hanan, Madinah and Ansata Bint Bukra; the later one we can find 20 times in his pedigree. In tail female line, Adeeb represents the Moniet El Nefous family through Messoudah-M (Messaoud x Madinah), a full sister to influential Imperial Madheen.

In the classes, the marks weren’t far apart which caused a tie now and then. This was also the case in the second class for two-year-old colts. Amir Al Jawhara was the lucky winner thanks to better marks for type with Kamel Alsadarah, sired by Oran Al Shaqab, being second. In the championship, the order was vice versa.

Interestingly enough some of the medal winners were shown before. Above all, we can claim that the Breeders Cup has brought a lot of horses into the show ring. Much to the delight of the spectators who had the chance to get a better impression of Kuwait’s Arabian horse scene.

Four senior mare classes with 44 lovely females came in front of the judges and the marks rocketed. Breeders and spectators witnessed marks significantly above 92 points with Rayana Al Safinat taking the biscuit. Never shown before she received 94,40 points; the high score of the show. A great day for her breeder Khaled Ben Shokor who presented Rayanas’ 26 years old granddam RN Rayana (Prince Fa Moniet x Ansata Sharifa and back to Ansata Bint Bukra) to the visitors of his stud presentation the other day. Another proof, the damline of Ansata Bint Bukra is very much alive.

During the Senior Stallions Championship, the atmosphere was, of course, electric. Again, the marks in the classes were quite high. “Yes, the marks were high, sometimes maybe a bit too high. Anyway, we tried to make a difference between the junior and senior classes to address the differences in the levels,” judge Christian Moscini sought to explain.

Firas Al Safinat, clear winner of 7+ years old stallions and the high score of all males (94,29 points), accomplished Gold; his greatest success until now. His pedigree reads like the who-is-who in Arabian horse scene being sired by Sinan Al Rayyan (Ansata Sinan x Al Wajba Al Rayyan) and out of Agayeb Al Rayan who is a granddaughter of Bint Amal – Hanan family.

Bronze was taken by Najm Al Ward, a son of M Raed (Dahes Al Rayyan x Reem Al Rayyan) and out of Shams Al Ward who represents the line of Hanan, too, but this time through Ameera. 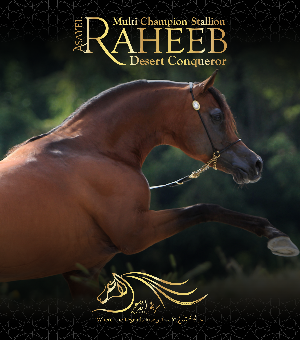