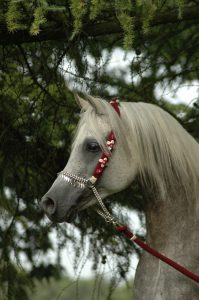 Grief can be encountered privately or publicly, felt in secret or experienced and expressed as a community. On January, 27th the Arabian horse world mourned the loss of NK Hafid Jamil (Ibn Nejdy x Helala).

Soon NK Hafid Jamil stepped out of the shadow of his sire Ibn Nejdy. NK Hafid Jamil put a stamp on his get. One could easily identify his foals. We did not see much of this family in the show rings but these horses adorn the stables of many breeders in Europe and the Middle East. There are several sons which will preserve the heritage of their famous sire. NK Hafid Jamil left behind a large legacy, especially at Dr Nagel’s Katharinenhof Stud where all horses have this stallion in the pedigree, at least once.

Though NK Hafid Jamil sired several sons of his own type several breeders were keen to have “the original” at their farm. This was the reason, NK Hafid Jamil travelled quite a lot. Last year, the flea-bitten stallion returned to his birthplace, the Katharinenhof Stud in Germany. There he was released on January, 27th.